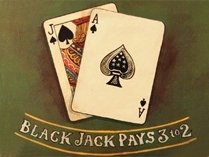 Blackjack is the second the most played casino game in the world, next to roulette. The origin of the Blackjack game is not perfectly clear, but the game appears to be related to Blackjack-like games that were played in Spain around 1570 and France around 1600.

Blackjack is a very appealing game because the more experienced you become, the smaller the casino's edge will be. Eventually, when mastering Blackjack, you can make your winning odds against the casino grow by making smart choices.

The name of the game was given by Blackjack players in the United States, where a playing cards manufacturer printed his brand name and logo (Black Jack) on the containing box. Ever since, people used that particular name for the game.

The game of Blackjack is one of the most popular games to be found in a casino. With its easy-to-learn rules and potentially large rewards, it's not surprising that the game has developed such a strong following.

Also known as Twenty-one, Vingt-et-un or Pontoon the game requires each player to hold a hand with a value as close to twenty one as possible.

Every round of Blackjack starts with each player being asked to place a bet in the middle of the table. Once these initial bets have been placed, the designated banker (who usually represents the casino) deals each player two cards face down.

The banker also deals himself two cards although one of these cards will be dealt face-up for the rest of the table to see.

The value of a Blackjack hand is calculated by adding the numbers displayed on the cards that the player has been dealt. Picture cards are all worth 10, with Aces being valued at either 11 or 1 (depending on which value suits the player best).

If the initial two cards that a player is dealt comprises of an Ace (worth 11) and any other card valuing ten, then the player's hand value totals 21 and the player is said to have 'Blackjack.'

When this happens, the player will instantly be paid 2.5x the value of their initial stake.

If a player is not dealt a Natural Blackjack, (s)he then has a decision to make about how to play the rest of the hand. They will need to decide which of the following strategies to follow:

Most Blackjack casinos, including Internet casino sites, worth their salt will allow players to split their cards if they're dealt a pair as their opening hand.

Splitting will require the player to double their initial stake, but will allow them to play each card as a separate, independent hand. This effectively doubles your chance of winning, as even if one hand goes bust, you still have the opportunity to beat the banker with your second hand.

Once your hand reaches a certain value, players are generally allowed to 'Double.' This strategy requires the player to double their initial stake again at which point they will be dealt one more and then forced to stand.

Most casinos will only allow a player to Double if the value of their hand is between 9 and 11, but it's advisable to check the individual terms of the Blackjack casino you're playing at as they tend to vary.

If the dealer deals himself an Ace face up, the other players around the table will usually be given the option to purchase insurance against the possibility of the banker achieving a natural Blackjack.

If a player wishes to purchase insurance, he will be asked to place additional chips into the middle of the table worth half the value of his original stake. If the dealer obtains a natural Blackjack, then the player will still lose his original stake, but will be paid out on the insurance that has been purchased. This works out at 2x the cost of your insurance - meaning that you neither win nor lose on the hand.

If the dealer doesn't have a natural Blackjack, then the player will lose the cost of their insurance and the game will continue based around the player's initial stake.

The Flow of a Blackjack Game

Europa Casino offers an impressive annual bonus of $2,400, with an additional 10% to 15% on top of your deposits, when you choose to make a deposit with an alternative payment method (Neteller, Citadel or Moneybookers).

Please have a look at our Europa Casino Analysis for further details.